Team Hoyt Oklahoma’s mission is to promote inclusion of disabled athletes in running and other endurance events, and to enhance the lives of individuals, families, and the greater Oklahoma community. 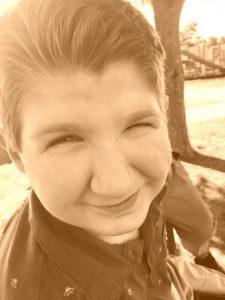 Stephen Heine was born in 2006, and at 18 months old, was diagnosed with a rare disorder that affects all areas of his development. He always loved watching his dad run in races, but was never able to participate himself. In December 2014, he was given the opportunity to participate in a program with a local running club and was pushed in a wheelchair for a 10K, and he never looked back. Despite the sleet and freezing temperatures that day, Stephen let his parents know that he wanted to keep racing, and they were able to get him his own running chair 6 months later. After a few years of racing with his dad, Stephen outgrew that chair, and began using a Hoyt Racing Chair. In April 2018, Stephen’s dad, Erik, ran the Boston Marathon, where he and Patty were able to hear the Hoyts speak about their experiences with inclusion and racing, and with Dick’s blessing, they were inspired to start Team Hoyt Oklahoma.

Rick Hoyt was born in 1962 to Dick and Judy Hoyt. During child birth, Rick’s umbilical cord was wrapped around his neck cutting off the supply of oxygen to Rick’s brain. He was diagnosed as a spastic quadriplegic with cerebral palsy. Doctors advised Dick and Judy to institutionalize Rick, as he would be a vegetable for the rest of his life. Dick and Judy refused and brought Rick home. Dick and Judy could tell that Rick comprehended his surroundings, even though the medical doctors continued to insist Rick was a “vegetable.” In 1972, the Hoyts raised $5,000 through bake sales, a local dinner dance and donations from friends and family. They paid that amount to a group of skilled engineers at Tufts University that built an “interactive computer” for Rick. Rick was able to see the letters of the alphabet and select the ones he wanted by pressing a pad on the headrest of his wheelchair with his head, the only part of his body he can move voluntarily. The first words Rick ever “spoke” were “Go Bruins!” The Boston Bruins were in the Stanley Cup that year and it turned out Rick was a Bruins fan.

In the spring of 1977, Rick told his dad that he wanted to compete in a 5 mile road race to help raise money for a lacrosse player who had been paralyzed in an accident. Dick, a non-runner at that time, pushed Rick for the full 5 miles. The pair finished next to last, but not last. That night, Rick typed “Dad, when I’m running, it feels like my disability disappears.” That was a powerful message for Dick, and that is where it all started.

Following the Boston Bruins winning the Stanley Cup in 2011, the Hoyt’s received an e-mail from Bruins’ defenseman Andrew Ference. The email read, “I wanted to let you know that the Boston Bruins watched and were inspired by your video prior to our Stanley Cup victory. It would be my honor to meet you and have you join me in Boston during my day with the Stanley Cup.” And they did. On April 8, 2013, a life-size bronze statue of Team Hoyt, commissioned by John Hancock, was unveiled on the lawn of the Center School in Hopkinton, just yards from the starting line of the Boston Marathon. The statue was unveiled in a 30-minute dedication ceremony. When asked about the statue, Dick said, “It doesn’t get any better than that. To us this is the Stanley Cup, this is the World Series.”

Then on July 17, 2013, Dick and Rick received the Jimmy V Perseverance Award at the 2013 ESPY Awards. The Jimmy V Award is given to those individuals in athletics who have overcome great obstacles through perseverance and determination. The award couldn’t be more fitting, with Team Hoyt’s motto being, Yes, You Can!” Dick and Rick were presented the award by Boston native Ben Affleck. As the Hoyts made their way across the stage, they were greeted with a standing ovation by the room full of esteemed athletes. On Monday, April 21, 2014, Dick and Rick Hoyt ran their 32nd and final Boston Marathon together.

Patty Heine has used her counseling background to advocate for people with disabilities to be included in all walks of life. She also works for a software company who has developed apps to assist people with complex communication needs. She can always be found cheering loudly at the finish line at all of our races.

Erik Heine has a PhD in Music Theory and has taught at Oklahoma City University since 2005. His research focuses on film music analysis. He has been running with Stephen since 2015. Team Stephen’s best 5K time is 18:51, and their best half marathon is 1:35:32. They look forward to going even faster.